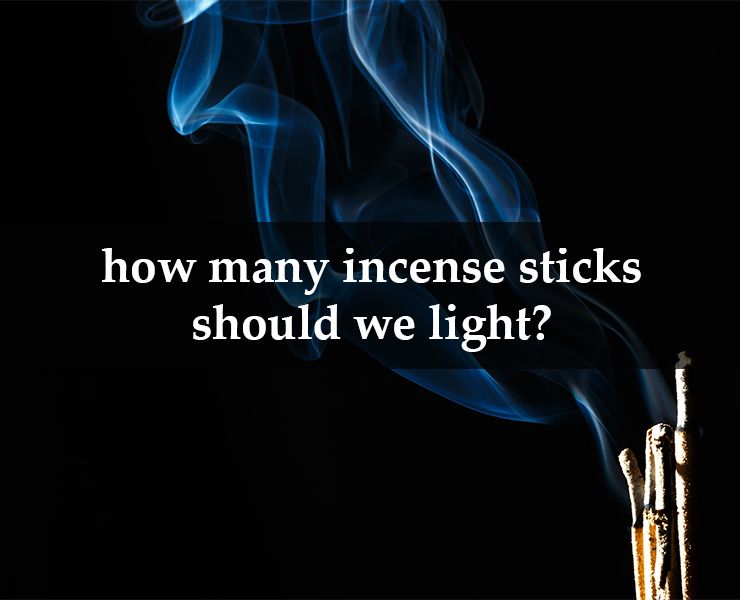 Lighting the incense sticks depends upon the environmental factor, place (where sticks have to be lighted) and of course the quality of sticks related to fragrance. Once all the factors are gauged, just light the sticks. For instance, places that are closed and small may need a single high-quality fragrant stick whereas an open spaces with some bad odour may require a pack of sticks.

In a closed environment, you should not burn a lot of incense at once. If you have a larger space now, perhaps a house then two or three sticks daily should be enough. Sometimes you will see incense being burned outside, particularly in a religious setting. It would be normal to burn a lot more in those environments due to the open air.
Generally, you can burn or light as many as you like, just keep in mind that too much smoke may prove unhealthy.

According to some cultures like in Asia, it's better to light odd numbers of incense sticks One or three or five or seven.
It is believed each number has its own significance. An odd number is believed to be good luck. In Vietnam, people burn incense, in numbers like 1, 3, 5, 7, 9, and do not burn incense in even numbers like 2, 4, 6, 8. According to reasons of feng shui rules, odd numbers 1, 3, 5 … have many lucky meanings because odd numbers are positive numbers that bring good luck and even numbers are negative numbers with bad luck.

It's better if you stick to one incense every time as it's better for both spirituality and environmental(= health factors.)

Which Fragrance of Incense is Best for You?

Reason to burn Incense Sticks for Meditation and its benefits

Why do people burn Agarbatti?

Why to choose “Liberty Agarbathi” ?