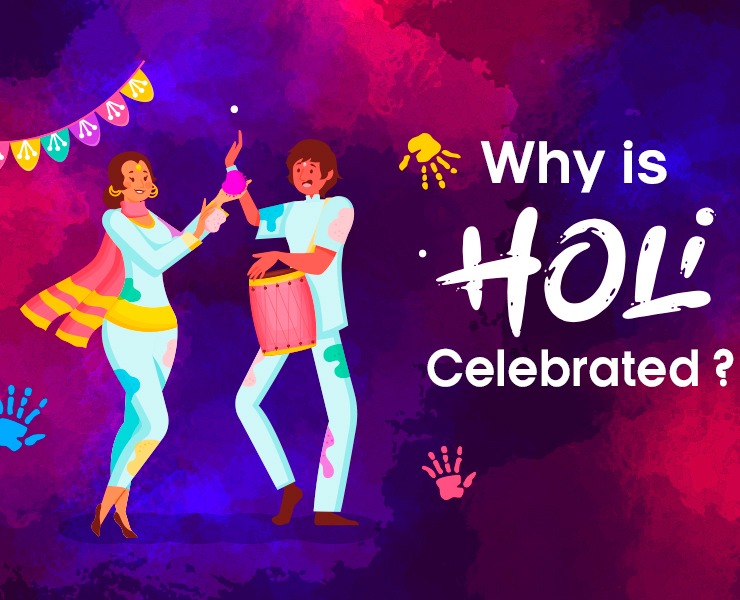 Holi festival is a celebration of colours and is celebrated from ancient times. It is one of the most important Hindu festivals of India. Holi is celebrated on the full moon day in the month of March. What makes Holi so special is the spirit of the festival and this remains the same throughout the world. Holi is mainly a harvest festival that marks the arrival of spring and the end of winter.

STORIES BEHIND HOLI AND ITS NAME


The day is also called Holika in some parts of India and this is where the name Holi is also derived from. According to Bhagwat Purana once a demon king Hiranyakashipu wanted to rule over heaven, earth, and water by defeating Lord Vishnu. Powered by a boon granted to him by Lord Shiva, Hiranyakashipu had become invincible, and people of Earth were dismissing the gods. Prahalad was sent to Earth by Lord Vishnu as an ardent devotee to him and this angered Hiranyakashipu who wanted to kill Prahalad with the help of his sister Holika. Holika was immune to fire and used this boon to kill Prahalad. She entered a raging fire with Prahalad in her hands but Prahalad emerged out of the fire unscratched. Holika was burnt into ashes as the boon she had was only when she enters the fire alone. Hence, this story is known as Holika Dahan, which signifies the triumph of good over evil and hence this story directly connects with the celebration of Holi.


This festival is also associated with the immortal love between Radha and Krishna. Young Krishna was very playful and mischievous. According to mythology, Lord Krishna was jealous of the fair complexion Radha had. One day Lord Krishna questioned his mother Yashoda about his dark complexion and why nature made injustice to him, whereas Radha was fair. To specify the crying Krishna, mother Yashoda asked him to go colour Radha’s face in whichever colour he wanted. Mischievous Krishna then coloured Radha’s face and made her one like himself. Therefore, colouring of Radha’s face on this day of love is celebrated as Holi.


Shiva was deep in meditation and Parvati wanted his attention. Breaking Shiva’s penance was not an easy job and she sought the assistance of Kamadeva, the Lord of love. Kamadeva shot a series of arrows of love at Shiva, in the hope of getting his attention to Parvati. The disturbed Lord Shiva was furious and opened his third eye and burnt Kamadeva into ashes. Later, Kamadeva’s wife Rathi was inconsolable by this tragedy and sat for severe penance for forty straight days. Please by her devotion, Lord Shiva restored Kamadeva to life. Seeing this all gods and goddesses showered colours from heaven and hence this is also in one of the stories associated with the celebration of Holi.

2. Barsana: Barsana is a historical town of the state of Uttar Pradesh, India. Barsana is believed to be the home of the Hindu goddess Radha, the consort of Krishna.

3. Shanti Niketan: - All this happiness, colours, and joy of Shantiniketan makes it the best Holi celebration in India.

4. Delhi: - For enjoying the festival of colours in a different way one of the most authentic places to celebrate Holi in India is Delhi.

5. Manipur: - Commencing on the full moon day of Phalguna, Holi comes underway the great Yaoshang Festival of Manipur making it a six-day festival.

6. Punjab: - They exhibit their martial arts on this day and have fun with colours in the evening.

7. Hampi: - The celebrations of Holi in Hampi include a loud riot of music and dance.

8. Purulia: - A 3-day-long Basanta Utsava is a folk festival celebrated in the Purulia district of West Bengal.

9. Udaipur: - Holi in Udaipur is absolutely spectacular and royal.

10. Jaipur: - Jaipur is probably among the best places to celebrate Holi in India.

Why Sankranti is Celebrated and it's significance