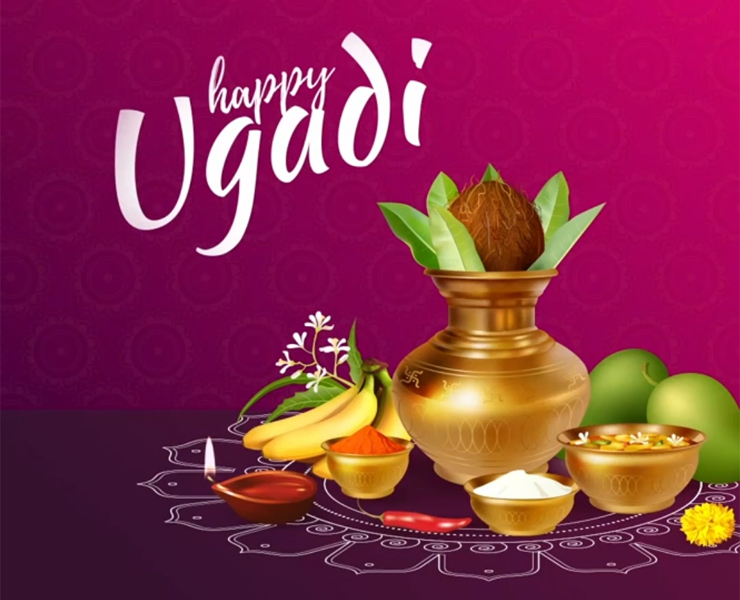 Ugadi festival marks the beginning of the spring season, which is considered as the first season of the year.
The first day of the Hindu Calendar is called as Ugadi in a large part of South India, Gudi Padwa in Maharastra and Goa, Baisakhi in Punjab, Kollavarsham in Kerala, and also called as Bihu in Assam.

Shuddha Paadyami, the first day of Chaitra month is where people decorate their houses with Torans made of mango leaves and red flowers and celebrate the festival with the best attire and full fervour.

The cycle of the moon is what determines many things in our lives. The same calendar determines the date of Ugadi.
Lord Brahma started the creation of the Universe from this day, and this belief has let the day be called Ugadi. According to Vedas, each year for us on earth is equal to each day for Lord Brahma.

There is also a mythological story related to Ugadi. The demon called Somukasura stole the Vedas from Lord Brahma and hid under the ocean. During this time Lord Vishnu killed the demon in the form of Matsya and retained back the Vedas to Lord Brahma, and all of this happened on the first day of Chaitra Masam. After this Lord Brahma started the creation of the universe. Hence, the first day of Chaitra Masam is meant to be auspicious and is celebrated as Chandramana Ugadi.

According to India’s great epics, The Ramayana, Rama was officially crowned as the king of Ayodhya on this day which led to the beginning of auspicious times for elated citizens of Ayodhya.

HOW TO CELEBRATE UGADI?

The first thing we do is to clean our house and get ourselves new clothes for the very first festival of the year. A ritual of applying oil and taking bath later is practised which symbolizes Maha Lakshmi in the form of oil and Maa Ganga in the form of water. Then after this many traditional Ugadi dishes are prepared. Because spring is mango season, one such popular dish is called Ugadi Pachadi. This dish is made with jaggery, neem flowers, mango pieces, and tamarind, which culminate in a medley of tastes — sour, sweet, and bitter — that reflect the multi-layered experiences of life’s beauty.

Why Sankranti is Celebrated and it's significance